1960-1970: A combination of education and labor education of students 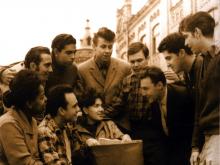 On the basis of research for years 1966-1971 it was received 432 copyright certificates and 20 patents; 372 textbooks and monographs were published,33 doctoral and 499 master's theses were defended. During this period, the institute has trained for the national economy nearly 20 thousand engineers of 58 specialties [10, p. 191].

However, there were significant shortcomings in matters of implementation of completed work. For example, in 1970, 356 works were prepared by university for implementation in the national economy, but only 82 of them have been implemented [3, p. 15]. As a rule, there were no acts of economic efficiency, which was achieved as a result of development and implementation of the recommendations contained in the thesis project. Delays in the implementation of new production often were due to lack of funds in the customer and unpreparedness production base. Thus, in 1970 employees of the institute received 100 patents, and only one of them was implemented as an invention [3, p. 17].

The rapid development of science objectively led to the improvement of scientific and technical knowledge of industry workers. Institute staff participated in developing plans to improve the general and technical level of the workers. Universities of technical progress, thematic lectures and evenings devoted to science and technology innovations "Days lecturer" meeting "round table" are widely used for their implementation.

A characteristic feature of the educational process was a combination of training and education. All forms and methods of interaction between teachers and students in both academic and extracurricular time were used. Curricula and programs were revised and improved. There appeared new courses. Special attention was paid to the fundamental physical and mathematical training; in-depth familiarization future engineers with questions of economics and organization of production.The detailed schedules of educational process and algorithms of individual courses were produced. They were more than 4 thousand of such students in 1970, nearly 30 % of the total number. A certain amount of research was performed at the Institute Student Design Bureau [4, p. 94]. Teachers paid much attention to adapt junior students, to orient them to their awareness and creative approach to teaching, research, socially useful work.

Labor education of students was carried out both during training and outside the classroom (in agricultural operations and in student construction brigades). It should be noted that the SCBs of Kiev Polytechnic at that time have developed a strong tradition. In 1966 many thousands of students KPI worked on rebuilding Tashkent, who suffered from the earthquake, at construction sites of the Tyumen region, virgin lands, in Salekhard, the construction of roads in Sayan, objects of Kyiv region.

A lot of attention was also given to the military-patriotic education of students. WWII veterans who worked in the institute took active participation in it. In January 1966 a group of veterans from the pages of the institute newspaper "Soviet engineer" asked the students, faculty, staff KPI calling to create a monument of our students and companions in labor who did not return from war. "This call found the response not only among KPI students, but also the Kiev Art Institute, who agreed to work on a project of the monument. The monument was opened November 5, 1967 This monument is a tribute to honor the descendants of human heroism and immortality. The authors are E.P. Veresov and sculptors O.G. Surovtsev and G.N. Morozov.

Students, teachers and staff KPI had interesting and informative leisure time. There were amateur art activities in such established groups as: honored folk choir, vocal studio, dance groups, pop orchestra, amateurs variety theater, bandurist choir, unison violins and more that have been joined by hundreds of polytechnics and helped reveal talents, formation of aesthetic culture. The institute had all the conditions for the development of sport, stadiums, gyms, tennis courts, playgrounds for sports. Athletes KPI successfully performed at international, Union, national, local and intercollegiate competitions. 1967 Institute team won the eighth-Union review of sports clubs of higher educational institutions. The composition of the national team of Ukraine, who participated in athletics IV Soviet peoples, included nearly 80 athletes KPI. During the Games of the Ministry of Education of the Ukrainian SSR in 1967 the institute team athletes, basketball players won the championship.Administration of the university always cared about the health and meaningful holiday of all students and staff. A sports camp "Sosnovy" on the banks of the Dnieper and sports camp "Mayak" on the Black Sea were constructed. Students strengthened their health, engaged in 28 sports, sportsmanship and increasing multiplying glorious sporting tradition in these camps. In March 1968, the students’ dispensary was created at the premises of the hostel number 9. The construction of new buildings and hostels and resorts were continued. Among the institute buildings of this period - laboratory building, dormitories on Nezhinsky and Vyborgska streets, classroom building. In 1966, the development of a single project master plan of reconstruction, energy and future development of the institution was began. Work was carried out to attract funds for the construction of other ministries and departments. In particular, it was planned construction of buildings with partial participation of the Ministries of Coal Industry, radio, power and electrification.

In the late 60s Institute moved to 5.5-year course of study that was due to the necessity of thorough assimilation of theoretical and especially physical and mathematical sciences young professionals and deepening practical training for future self-employment. In 1967, over 330 young people from 34 countries got engineering professions in walls of KPI. In 1968 more than 100 people began to study (8 of them - graduate students and interns) from Vietnam, Bulgaria, Germany, Poland, Africa and Latin America.

In 1968 in all forms of education faculties KPI 12 there were 30 600 students. There were branches of the institute in Chernihiv and Vinnitsa, and general engineering departments in Zhytomyr and Konotop. More than 1,500 teachers worked at 110 departments, training was conducted in 52 specialties. Specialists in chemical cybernetics of cybernetics and electronic systems started to be trained.

During 1969 the Institute continued improvement of the structure by establishing new departments - Technical Cybernetics (at the Faculty FAEPS), chemical engineering ceramics and glass (FCT), tool production (MMF); new specialties were introduced - automation control systems, applied mathematics. At the same time to increase the level of general education of young people with experience of practical work and released from the Soviet Army a preparatory department of the annual period of training was opened, which took 100 people; 75 - on the day and 25 - an evening learning.

April 12, 1968, the Day of Cosmonautics, on the facade of the main building of the KPI it was opened a memorial plaque in honor of the author of the spacecraft, a former student of the university – S.P. Korolev. February 20, 1970 there was another plaque - Memory Acad. AN Ukraine E.O. Paton, who more than 25 years headed the department of bridges created here over thirty of projects, which were differed by innovation, daring engineering calculations and creative flight of thought.

History of the university