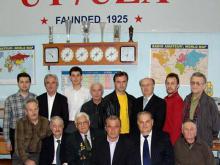 At the roof of educational building number 22 of the Institute of Energy Saving and Energy Management Igor Sikorsky Kyiv Polytechnic Institute, you can see a strange antenna structures that rotate in directions of different countries and continents. These antennas belong to the world known radio club "Polytechnic", whose members are students, faculty and staff of our famous university, university students of Kiev, who in their spare time are doing things they love - Radio Ham!

The history begins with a long-range radio club in 1925, when at the KPI, the known electronics scientist, professor Ogievskii Vladimir, has created the amateur radio club. In the same year the first Russian club amateur shortwave radio station with the call sign - R1KPI (Russia-First-Kyiv-Polytechnic Institute) was on the air.

In 1974, with completion of the construction of the building number 22, to meet the wishes of students, and the decision of the KPI due to substantial assistance of the former military radio operator- Dean FGEMA Professor V.M. Vinoslavsky it was given the room to the radio club. This room was located on the 7th floor building № 22 where the radio club "Polytechnic" "KPI", is continuing its glorious traditions.

Thousands of students have gained in the KPI radio club excellent school construction and development of complex technology, have become well-known experts in the field of sophisticated and advanced forms of communication, radio, antenna systems, electrical and automation, microcircuit, receiving and transmitting equipment, its impact on people and the environment. Our members have a great opportunity to deepen their knowledge of foreign languages, geography, computer equipment and electronics obtained in the University. Based on this knowledge they successfully continued their career,  became the leading experts in enterprises, academic and research institutions. At the same time they do not break creative relationships with the club, actively help it in dealing with complex issues of our time.

Amateur radio station of the club UT7UZA has a license of the State Committee of Communications of Ukraine the highest category № 0073/1 \ K, issued to allow work on the air in all the bands, all kinds of modulation allocated by the International Telecommunication Union, whose headquarters are located in Switzerland. Communication in the air we make by telegraph, telephone, digital and other modern forms of modulation. Our operators use the popular languages ​​of the world.

The powerful rotating antenna, developed by members of the club and  mounted on the roof of the building number 22 IESEM, became the pride of the club, its trademark. Using them our amateur radio station establishes communication with the distant countries all over the world!

Club amateur radio station has always been at the forefront of all the important events - from the Olympic Games in 1980 (RK50) to establish communication with the crew of the famous boat "Ra", led by Thor Heyerdahl and the first Soviet mountaineering expeditions, carried out a unique climbing the highest peak of the world - Mount Everest ! By the way, all radio equipment of  this expedition was designed and manufactured by the member of our club V.Cherevko!

The walls are decorated with high international  awards - cups and diplomas for winning in various competitions and achievements, certificates  from many countries and Ukraine! History and creative life of our club is always the focus of a major international amateur radio family, and the club is one of the most popular among these amateur groups in the world.

The club is a school for amateur knowledge through a magical romantic world our passion for life.

Since 1925 and until today the club continues its glorious history. The world was changing, many countries appeared and disappeared from the map, and the radio station KPI established  radio contacts with all these countries, finding there friends and associates.

One of the best players in the world, now one of the coaches of the team "Dinamo" Kiev Sergei Rebrov (UT5UDH), which combines the highest level of football and amateur radio hobby, is also a member of our team. In addition, Sergei as ham radio has achievements in sports and achieve much higher than football!

We support creative communications by radio with amateurs from many educational institutions of the world, often meet with them. The amateurs - colleagues from 70 countries - students, ministers, scientists, diplomats, businessmen, athletes, movie stars, business leaders visited us. There are their entries  in the guest book.

Material and technical base radio club is also used in the learning process – there are held here demonstration lectures, practical work on "Influence of electromagnetic radiation industrial and household appliances, equipment, computers, televisions, mobile phones and mobile communication and the environment."