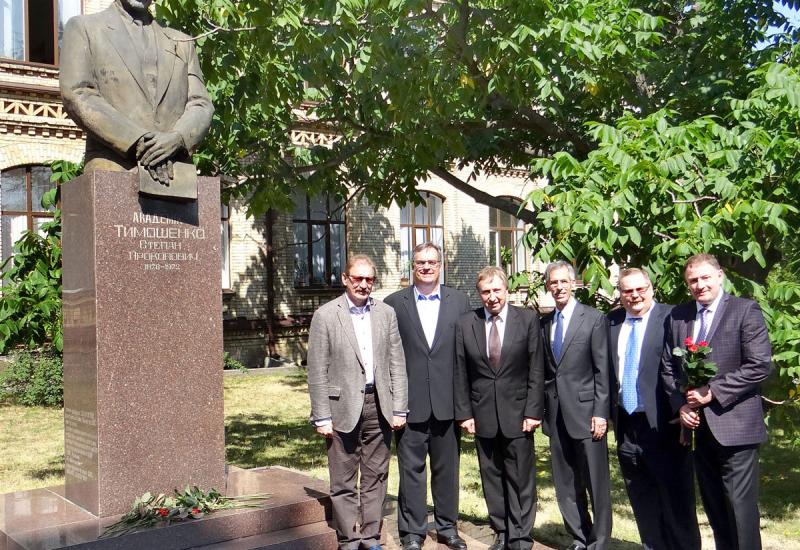 At the end of July heads of Boeing Corporation visited Ukraine. They took part in official opening of the Engineering center "Boeing Ukraine" named after S. P. Tymoshenko (Boing Design Center) in Kiev. This Center will provide specialists in designing, durability and technology of aircraft construction of NTUU "KPI" and, in particular, its Institute of Mechanical Engineering. Therefore representatives of one of the world's largest producers of an aviation, space and military equipment visited our university. Here they got acquainted with the activity of the KPI Joint Educational and Scientific Center and the group of companies “Progresstech-Ukraine” (this group is the partner of the Boeing corporation in Russia and Ukraine) created on the basis of the KPI Institute of Mechanical Engineering. Guests were welcomed by the rector of the university M. Z. Zgurovsky, the vice rector of international relations S. I. Sidorenko, the director of the Institute of Mechanical Engineering M. I. Bobir and others. We offer you to read the message about this event that was placed on the Internet portal of the corporation.

"Everyone here in the Kiev Engineering center does the “Boeing” company even better and more competitive,-John Tracey, the executive technical director and the senior vice-president of division Engineering, Operations & Technology of the company addressed to engineers and guests during the ceremony of cutting the red tape. - We count on your assistance in the solution of technical problems which we face, and your help in this business is important and valuable".

The center started to function at the beginning of this year and it consists of several hundred engineers who support projects of division of Commercial Aviation Services (CAS). The staff of the Engineering center of Kiev works on ways of business growth of supporting the air fleet of CAS division and on increase of work efficiency with airline clients thanks to the optimization of engineering work worldwide.

According to the management of the company, the Center promotes the realization of global strategy of the Boeing company in laying the basis for increase of competitiveness and ensuring the future growth in the market.

"The new Center will allow us to involve the unused potential which exists in the field of an aircraft and rocket engineering in Ukraine, - Delaney noted. - It will help the company to save its position of the world leader not only in aerospace industry, but also in the sphere of technologies and innovations".

The Engineering center of the Boeing company in Kiev called in honor of Stepan ("Stefana") Tymoshenko, the Ukrainian-American scientist and professor who is considered as the founder of modern science in the field of aerospace materials and constructions. He lived, worked and taught in Ukraine and the USA and he is the author of handbooks that are used around the world for teaching engineers in the area of aerospace designs.

After the opening ceremony Mikhail Zgurovsky, the rector of National Technical University of Ukraine "Kiev Polytechnic Institute", the leading national educational institution in the field of an avia - and rocket production, showed the heads of the Boeing company the university campus and visited together with guests the State Polytechnic Museum at KPI. There are exhibits and memorable things that show more than centenary history of the institute where the aircraft designer and inventor Igor Sikorsky designed and constructed his first fixed wing and a wing with a rotor.

Besides, the university is the Alma Mater for Sergey Korolev, the founder of the first Soviet space launch vehicle, thanks to which the flight in space of the first person in the world Yury Gagarin was carried out.

Members of the delegation laid flowers at the monument to the Ukrainian engineer Stepan Tymoshenko (on the photo).

Strengthening the partnership of the Boeing company with NTUU "KPI" will promote the staff expansion of employees of the Engineering center in Kiev.

During their visit Tracey and Delaney also visited offices of the company in Moscow and held meetings with the staff of the Russian representative office of "Boeing" and the main Russian shareholders.

Elena Alexandrova, the director of the company "Boeing" on public relatins in Russia and the CIS

The signature to a photo: