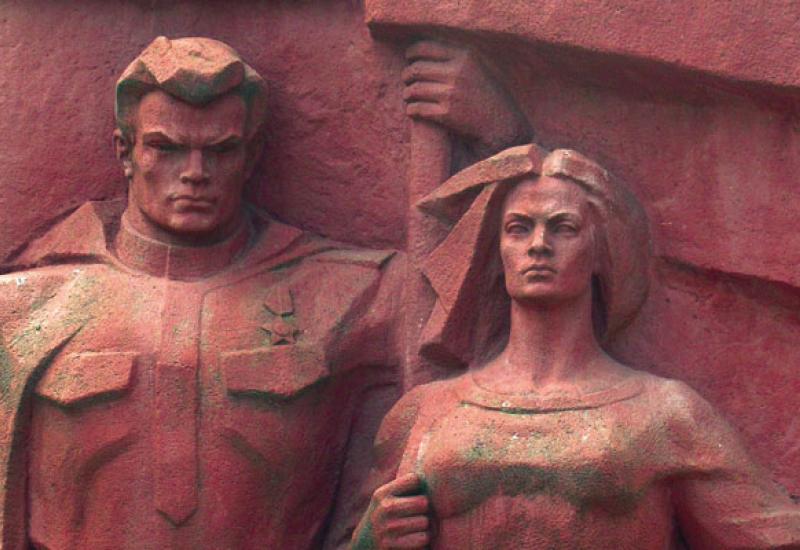 We walk every day at the monument to the fallen of the polytechnics, which stands near the metro station. On the monument is the inscription: "Courageous. Selfless. Invincible. Students, teachers, employees of the Kiev order of Lenin Polytechnic Institute who gave their lives for the Soviet Motherland in the great Patriotic war of 1941-1945"; "Who for freedom fought against death there is no death on the earth. A. Malyshko".

On 22 June 1941 Nazi Germany started the war by bombing by. Then the bombs fell near Kyiv Polytechnic – the plant "Bolshevik".

Three hundred men of the faculty KPI two-thirds went to the army. All fifth-year students (over 700 students) after short-term training went to the front and became commanders. 650 students worked selflessly for the construction of defensive lines around Kiev. Many of Kyiv polytechnics joined the militia units, anti-aircraft and chemical defense.

Those who were not at the front, worked for the victory in the rear. And their contribution to the victory was very significant. One has only to mention the name of Professor KPI.And.Paton, who developed a method of welding of tank armor that was used in the production of the famous T-34 tank. He was assisted by his son.There.Paton, a graduate of the KPI 1941, now President of the NAS of Ukraine.

The joy of Victory on may 9, 1945 was overshadowed by the sorrow for the dead. Have a book With the war and did not return," published KPI in 1995 for the 50th anniversary of the Victory. It contains short stories about Kiev polytechnics who died defending the Motherland, and now lie in graves all over Europe: from the Volga to Berlin and from Latvia to Moldova. And many and graves not to be searched out by "missing", "fate unknown". The book has over two hundred names. Surnames 175 engraved on the plates that are installed next to the monument to fallen polytechnics ten years ago. Several immortalized in the names of the streets of Kiev, Sholudenko, Chamilo, Khokhlov...

The fate of those who returned or came in the KPI after the war, was not easy – they are not only taught and learned, but also restored the destroyed by the war. 700 combatants worked and studied in the CRPD in the post-war years. Through their dedicated work, the Institute has not only restored full operation, but also evolved and expanded.

More than half of soldiers worked for faculty positions. Almost 40 of them defended his doctoral dissertation and received academic titles of professors. A significant contribution to the development of post-KPI made deans Butuzov V. O. I. D. Trubina, Would.F.Natars, I. K. Kosinenko, G. M. Ovsienko, N. With.Match, V. Gil-czewski. Educated engineers and developed various areas of technology, the defenders of the Fatherland – heads of departments A. P. Ornatsky, N. Yu.Jerusalem's, J. D. Glukhov, K. G. Samofalov, V. Kostylev, N. In.Sadoun, A. Ralko, M. P. Panchenko, A. V. Belotsky. Significantly increased the number of educational buildings and dormitories, when the rector of KPI was a combatant G. I. Denisenko.

Remember the heroism of those who gave their lives defending the Motherland, Kiev, the family in the end so that we could live. And each time, passing near the monument to fallen Polytechnic, mentally say: "Eternal memory to the defenders of the Fatherland!"