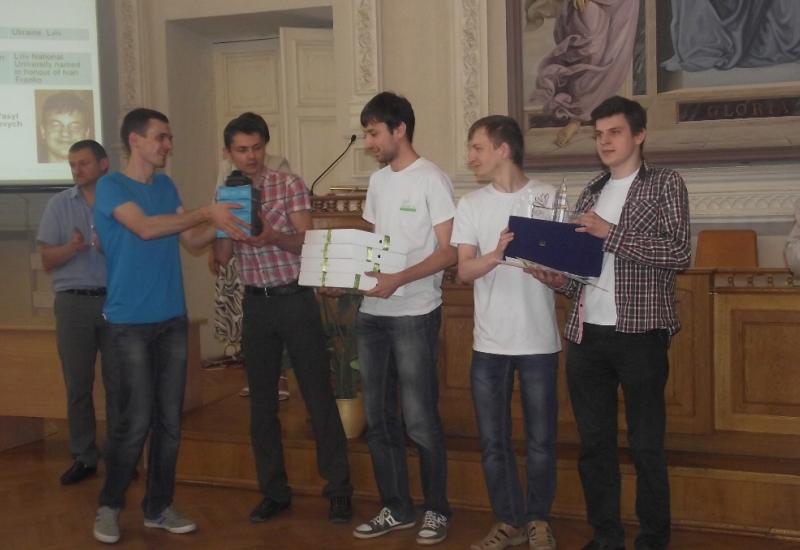 Not all the teams managed to cope with the tasks which were prepared by Olympiad providers. However, participation in this kind of event gave all competitors a great opportunity to gain new experience and to have a fresh look at the chosen specialty.

The head of organizational committee, Ivan Plotnikov and representatives of sponsor companies, MacPaw and ITVDN, congratulated all participants who were fighting to the finish.

“Each of you invested his time in himself, his development. You looked at you from the outside and determined the spheres for further development.”- noticed Olga Ostapovych, HR-manager of MacPaw, while congratulating Olympiad participants. “I’d like to wish you never lose drive, desire and passion for new knowledge, developments, complicated projects… There won’t be any positive result and success without these factors. That is why I wish you to go an extra mile, not to be afraid and be excited about new achievements”.

The teams that occupied 4-6 places were grated the Diplomas for Advanced Achievements.

The following teams of Jubilee Olympiad were pronounced the winners:

Thus, the grand prize of “KPI-Open 2015” Tournament, the crystal tower of KPI, decorated with Olympiad symbols, goes to Lviv this year along with the team from Ivan Franko National University.

Nevertheless, Ivan Plotnikov was also presented with a gift: NTUU “KPI” vice-principal of educational work Petro Kyrychok granted him with a certificate of gratitude of Solomianska State District Administration in Kyiv for his contribution to youth education and preparation of specialists. It should be noticed, that it is the second prize for constant tournament provider: at the last Board of Academics Meeting Ivan Plotnikov received Honorary Certificate of Board of Academics od NTUU “KPI” on the occasion of the 10th Jubilee International Open Student Programming Olympiad named after S.O. Lebedev and V.M. Glushkov “KPI-Open 2015.”

Jubilee Tournament has opened a new stage in its history. It refers not only to the complication of the task, involvement of new partners and sponsors, program improvement and expansion of participants’ geography. Cultural aspect of the Olympiad became more diverse. Traditionally, it included city excursions, motor ship excursion along Dnipro, football matches, concert etc. This year the list of activities was expanded within OpenARTstage. The first was jazz concert performed by Alex Fokin DJAZZ BAND in the Arts and Culture Center of NTUU “KPI”. The musicians performed new program DJazz. The second day was devoted to jazz concert by Oleksii Bogoliubov (piano), Alika Fantaeva (percussions) and French Vibes Band (French lyrics with author’s jazz orchestration) and Samba Project (Latin American Music). According to Ivan Plotnikov, OpenARTstage producer center plans to make this festival international in close cooperation with higher educational establishments of Kyiv, primarily, with NTUU “KPI”.

The 10th jubilee tournament of young programmers “KPI-Open 2015” is finished.

In the photo: team members LNU Penguins who took the first prize in “KPI-Open 2015” Olympiad receiving presents from sponsors and providers.