International Scientific Conference on the basis of FL 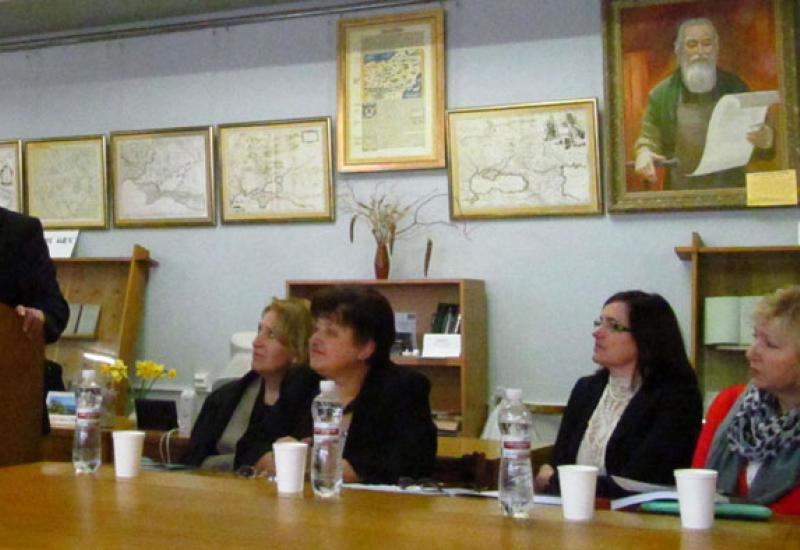 On the 17th of April, 2014 the first International scientific-practical conference "Languages Professional Communication and: lingvocultural, cognitive-discursive, translation and methodological aspects" occurred in "KPI", organized by the department of theory and practice of translation of French language at linguistics faculty. The conference was attended by teachers, doctorals and graduate students from 44 universities and institutions from all regions of Ukraine, representatives of the Russian Federation, Kazakhstan, France, UK, USA, Pakistan and Algeria.

The Dean of FL Sayenko N.S. and the assistant professor of the theory and practice of translation of French language at linguistics faculty Polyuk I.S. greeted all the participants.

Leading scholars of several Ukrainian universities performed at the plenary session. The Doctor of Philological Sciences, professor O.R.Valihura devoted her report to the issue of language. Problems of translation - as a complex science - were showed in the report of the Doctor of Philological Sciences, professor S.P.Denysovoyi (Kyiv National Linguistic University). A deep and thorough analysis of cursive writing as a method of compression of the text when interpreting was done by the Doctor of Pedagogical Sciences, professor L.M.Chertovatyi (Kharkiv Karazin National University). Mike Martuchchi, teacher-methodologist of the U.S. State Department (Jeanette Demiray Teaching Resource Center for the support of the U.S. embassies in Ukraine at Kyiv-Mohylanska Academy) described the feasibility of implementation of massive open online courses (MOOC) as one of the newest forms of distant education in educational practice, which is being actively developed in the world education, and he also introduced the concept of "reverse learning" proposed by the Kana Academy, and emphasized the need to include the program of the development of Critical Thinking to the curriculum. The report of doctor of sciences and the professor of department of the theory and practice of translation of French in "KPI" A.A.Kalyta was devoted to the basic positions of new concept of power of speech contemplated by her. The report by the candidate of philological sciences and assistant professor from NTUU “KPI” Z.M. Korneva about the peculiarities of the studying English by professional students of the first courses of technical specialties in high education institutions was the last one at the plenary session.

In the conditions of globalization which are taking place in the world, Ukraine's European integration, along with a high level of professional training of future specialists, special importance is given to foreign language communicative competence. Discussion of key issues about forming the foreign language competence of students through the integration of communication, sociocultural and intercultural development of students by means of foreign language session was dedicated in sections on technology innovation of learning a foreign language for professional purposes. In particular, the issues of people-centered approach to teach-supply foreign language professional direction were discussed, it was based on the consideration and development of student skills by means of a foreign language (L.V.Bondar, the candidate of philological sciences and assistant professor from "KPI"); it was also devoted to finding ways to improve teaching oral language and writing to students on the basis of integrate teaching methods and Internet resources (D.H.Rastyehayeva and O.V.Vaschylo, the teachers of "KPI") and others.

A lively debate has been caused by the performance of Michael Bedvela from British Education Centre (Kyiv). In his report he drew attention to the peculiarities of the skills of English writing in the context of training for system analysts and career issues analyzed during the study.

Following the discussions, the participants adopted a resolution which, inter alia, contained the thoughts about the expediency of integrity to the establishment of expediency in "KPI" Center for fundamental research in linguistics, translation studies and methods of teaching foreign languages as unprofessional discipline in higher technical education.

O.M.Parkhomenko,
The candidate of philological sciences,
Assistant professor of the department of theory and practice of translation of French
at LF, NTUU “KPI”, Coordinator of the conference
Translator: Микуляк Жанна ЛА-11