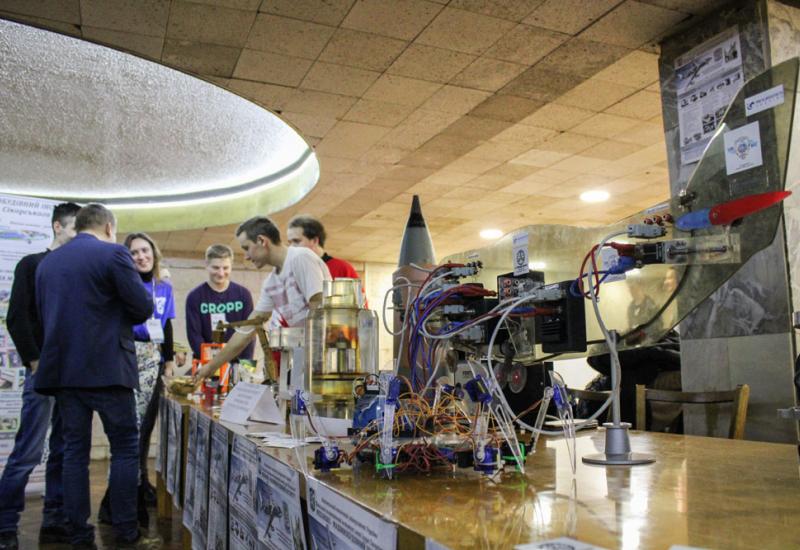 More than 200 students-volunteers, 100 teachers and more than 1 000 visitors visited the Scientific and Technical Library of the Igor Sikorsky Kyiv Polytechnic Institute last Saturday because of KPIAbitFest. This year, the festival combined a traditional informational event with a presentation of inventions and experiments of our polytechnicians. The applicants saw the practical side of studying at the university, chose the interesting areas of studying and the students demonstrated their achievements.

The first pro-rector of the Igor Sikorsky Kyiv Polytechnic Institute Y. Yakymenko introduced the guests to the history of the university, told about the programs of international educational exchange and cooperation of the university with the leading world companies. He said that students of some specialties can obtain two diplomas at once:the diploma of the Igor Sikorsky Kyiv Polytechnic Institute and of the partner university. The pro-rector advised to choose any area of engineering education as the future depends on it. There is no faculty where you can knock around. “You must study at the university. It is not easy to enter our university, but it is even more difficult to graduate,” said Y. Yakymenko.

N. Seminska, the pro-rector for educational work of the Igor Sikorsky Kyiv Polytechnic Institute, spoke about the fields of study and the range of choice of professions, the number of contract and budget placesin the faculties and the most popular specialty. The applicant now prefer IT. The average EIT score to enter IT must be at least 180-190+.

Engineering is one of the most promising area in the labor market: over 300 enterprises which lack professionals have been opened in the last 4 years. The university encourages future engineers with a large number of budget places, as well as different scholarships for students who successfully study and take part in scientific and practical development.

V. Mozharovskyi, Deputy Chairman of the Admission Committee, answered the most popular questions about this year’s university admission process. In 2020, you can submit a maximum of 5 applications for budget for one or different specialties within 10 days. The number of contract applications is unlimited. Additional points are possible for participation in the All-Ukrainian Olympiads, Olympiads of the Igor Sikorsky Kyiv Polytechnic Institute, awards of the Junior Academy of Science of Ukraine and pre-university training, but only for those specialties where there is branch coefficient. It is possible to transfer from the contract to budget after the first year to the vacated places of the students that have been expelled. Preferential places are also possible, however, less than 0,5% of those applying are really entitled for preference.

Some interesting things from students

The culmination of the festival was the presentation of students’ researches and developments. The faculties and institutes represented their own scientific experiments that you can not only observe, but also participate in them and to feel yourself a scientist.

The students of IAT launched the first model of a rocket and represented the models of unmanned airplanes. “We have an opportunity to build the planes from dusk till dawn. Here we can be learnt how to design, make drawings, work with the help of hands. If you have a desire, you can even build a whole plane! The most important things are skills and intelligence,” – Kyrylo Surkov, the 4-year-student says. Today, this boy has a job in his field.

The representatives of MMI presented the works of their own production, the developments of human skeleton studies for the production of prosthesis and other interesting things. The Faculty of Electronics showed their competitive project – the multilevel protection against water leakage. Also, the faculty represented a virtual synthesizer and demonstrated the process of the live broadcast in a television studio of a technical viewpoint that will occur. The FRT were launching their own cars through the library on the radio control. The ITS gave the participants an opportunity to cut a wood by a laser, the FICT gave the task to assemble the system unit for speed.

The visitors were invited to the FBB to work with microscopes. The student Dasha Belinska told them that the use of living cells for medicine productions is a perspective way. “Biotechnology is not only to work with pills, - Dasha clarifies. – We are exploring the fuel, because a gas and an oil cannot be used forever. The faculty studies the technologies of water purification. We are trying to solve global issues by using living species”.

The FIM designed the robotic manipulators and created an artificial intelligence. Andriy Mamat, the assistant of the department of devices and non-destructive control systems, told us about the projects. “The represented works are the projects of bachelors and masters. Everything was made in our department. We have milling machines, 3D printers and all necessary equipment. A student comes to us learns how to produce any systems, devices and robots from the very beginning. He can independently make his choices, but he is only limited with his imagination”, - Mamat shares the information with us. The students’ inventions looked really fantastic, as everyone embodied his own designs that wereonly ambitious dreams because of lack of knowledge and resourses.

“This year we organized not only the Open Day, but also a striking festival in order to encourage the entrants and help them determine the direction of study. More than 1100 participants from all parts of Ukraine attended AbitFest. Undeniably, this event for the KPI entrants is the largest one throughout years”, - Natalia Seminska concluded.