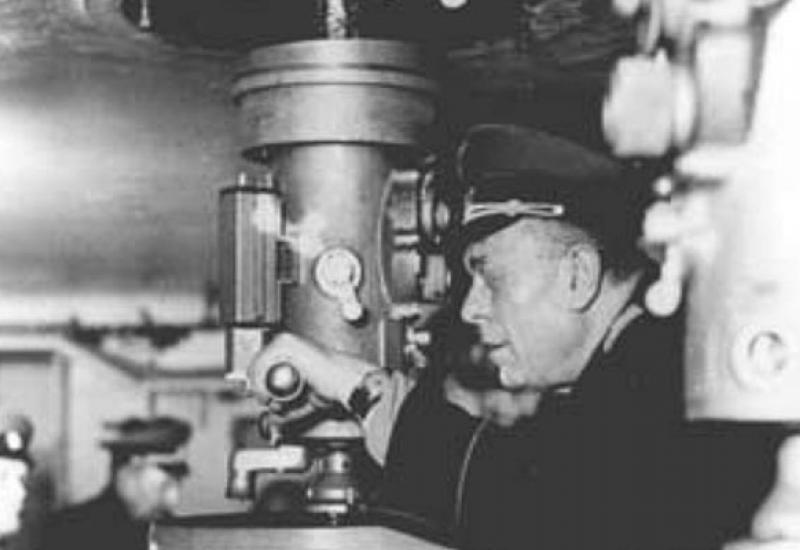 Vasily Voznyuk. The whole history of the formation and development of Soviet rocketry related to this legendary name. He is a man of unusual destiny, an example of service to his people, his homeland.

V.I.Voznyuk was born in the town of Vinnitsa region Gysin January 1, 1907 in a family of actors. His childhood was spent "behind the scenes". In 1914 he entered the Kharkov school, but studied only 3.5 class.

Once seen steamers, the guy decided to become a sailor. In 1923 managed to enter in Mariupol on the ship and coastal waters "smell the sea" and liked it.

On Komsomol assignment Vasily was sent to study in Leningrad, at the Naval School of M.V. Frunze, but there he was not enrolled, as he had no secondary education. Then he enrolled in the First Leningrad Artillery School named Red October, from which he graduated in 1929's third performance.

He was assigned to the 30th Artillery Regiment (the city Dnepropetrovsk). Until 1938 Vasily went through all the command levels from platoon commander to the Chief of Staff of the regiment. In its characteristic it was noted: "He has the willpower, is very demanding of himself and his subordinates, constantly shows the initiative. Energetic and decisive, the decisions made in implementing the organization provides a good, persistent and very conscientious, diligent work ".

In 1938 Vasily was moved to the Penza Artillery School to teach the artillery tactics. In Penza, he moved with his family. In 1931 in Dnepropetrovsk Vasily married Martha Jakovlevna Danilchenko, who became his sincere friend and advisor.

In 1940, V.I. Voznyuk was promoted to the rank of Major, and he enrolled in the Correspondence Department of the Artillery Academy. 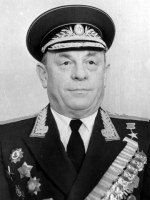 The Great Patriotic War Vasily met in the Western Special Military District as chief of staff of anti-tank brigade. In September 1941 he was Operations Chief of Staff of the artillery of the 13th Army. And then suddenly there was a change in his service, defined his entire life. Major V.I. Voznyuk was recalled to Moscow and appointed Chief of Staff of the group Guards mortar units (GMCH) Supreme Commander. September 14 rocket launchers (future "Katyusha") on their own power went from Moscow to the south.

A few days later, Vasily Ivanovich took the fight at Poltava. He wrote: "volley" Katyusha "September 23, 1941 in Gogol places I remember for a lifetime. Our troops went on the offensive, 12 kilometers they met the resistance of the enemy - he ran away. Guardsmen-mortar terrified the enemy infantry and tanks smashed, carried out raids deep behind enemy lines. "

Chief of Staff GMCH V.I.Voznyuk cleverly developed the effective tactics of use the new weapons in the fight. This was noted by the Government in 1941, when few of the officers could boast the awards, Vasily Ivanovich was thrice awarded the Order of the Red Banner. In December 1942, he had already received the title of "Major General of Artillery", in September of the following year, after the start of the counteroffensive at Stalingrad - the title of "lieutenant-general." Even in wartime such growth was an exception, a certificate of recognition of his outstanding talent commander.

V.I.Voznyuk met the end of the war in Vienna as the deputy commander of the artillery of the 3rd Ukrainian Front GMCH, who was then Colonel-General of Artillery Mitrofan Ivanovich Nedelin - later the first Commander of the Strategic Missile Forces.

On the recommendation of M.I.Nedelin in June 1946 Vasily Ivanovich was appointed chief of the future missile test site.

Subsequently, Vasily Ivanovich wrote: "We have to imagine how difficult it was for 4-5 months to focus on the range of several thousand people, provide them with food, water, laundry, warm housing, as severe winter was approaching. Around - the steppe, takyrs, salt marshes, sand , thorns, heat and wind, sometimes turns into sand storms, and many gophers. There is not a tree, not a single village. " Vasily Ivanovich could be seen on all construction sites. Thanks to his energy and organizational talent, rigor and determination until October 1 site was ready.

October 18, 1947, in the Soviet Union there was launched the first controlled ballistic missile, designed S.P. Korolev. This was a birthday of the first missile test site, which became the starting line, the starting point of the rapid development of missile technology to cosmic heights. Officially, it was given the name "SCP-4" (State Central polygon number 4).

Vasily Ivanovich began studying unfamiliar equipment: construction of rockets and aggregates, technology training, used fuel. Often he went to the test site and participated in meetings of the State Commission. And soon his knowledge and erudition surprised experts, and sometimes - and the main designers. In organizing and carrying out the work of the polygon he was firm and persevering. He quickly grasped the problem and was able to highlight important in solving a particular problem. If something went wrong or there are mistakes he acted tough, but do not make decisions without consulting with experts on the subject. At meetings and committees he always gave the opportunity to speak to specialists in the issues raised by the dispute. His memory was tenacious, good. Sometimes he could remind someone of an unpleasant incident that occurred a few years ago, but never at the same time not insulting and humiliating a man. He was very carefull with the test engineers. He understood that their competent, self-sacrificing, and often - and dangerous work is the key to the high authority of the test range. And always he defended their opinion to the representatives of the industry. For this he was respected by the specialists rocketry and chief designers.

Sometimes Vasily Ivanovich went against the chief designers. When testing first solid rocket RT-1 testers found insufficient margin of stability control system (CS) in pitch and yaw, which could lead to an accident missiles in flight. This was reported to Voznyuk. He wrote his report and invited representatives of the industry to deal with this shortcoming, and by the end of the work start to be postponed. But S.P. Korolev, along with chief designer of CS N.A. Pilyugin insisted on starting. The rocket launched, and in-flight accident occurred, which showed that the missile control system really needed the correction work. After this incident, the leader in missile design bureau became much more listen to the experts site.

From 1947 to 1957 Kapustin Yar was the only place of Soviet ballistic missile tests. On the polygon there were tested missiles R-1, R-2, R-5, R-5M, P-12 and many others. July 22, 1951 for the first time in the world it was the launch of the rocket with animals on board - dogs Dezik and Gypsy, and later launched a whole program to launch animals. Korolev closely followed the results of these start-ups, because even then foresaw manned space flight.

Polygon was developing. There were new launchs and technical complexes, improved test methodology. The Head of the polygon constantly watched all constituents of the "life" of his offspring. Despite the fact that the post of the head of the polygon was related to the rank "Lieutenant-General", in August 1955 V.I. Voznyuk for special contribution to the creation of the polygon, the full development of test facilities and the provision of effective test of missile technology was awarded the title "General colonel of artillery. "

February 2, 1956 at the Kapustin Yar it was first held launch of R-5M with the combat nuclear charge. In 1957-59 years there was tested a winged intercontinental ballistic missile "Storm". August 31, 1959 for the first time in history it was carried out the launch from the mine of medium-range missile R-12.

March 16, 1962 from Launch Complex mine “Mayak-2" it was launched the satellite “Cosmos-1” by the carrier rocket 63S1. Polygon became cosmodrome. With its starting position continued to explore space, space systems practiced in the interest of creating a shuttle "Buran", experienced model "Soyuz" and many other systems, and, as a rule, for the first time.

October 14, 1969 it was held the first satellite launch "Intercosmos" for the study of ultraviolet and X-ray radiation from the sun, and from 28 November 1970 to the program "Intercosmos" there were began missile launches "Vertical". They included in their the equipment scientific instruments for research in a wide range of physical phenomena involving many countries of the world.

Thanks to the care of the chief of the polygon V.I. Voznyuk it was developed and housing military town (site 10), where the officers testers and their families lived. First there were tents, prefabricated houses, and later - two-storey houses, shops, schools, kindergartens and all that was necessary for life.

Vasily put a lot of efforts to comfort the town. From all over the Soviet Union the seedlings of various trees were brought. However, to create a park for tourists and grow trees in this scorching hell, all the inhabitants had to work. For each family there were assigned planted trees. Morning and evening they watered, cared for them, and every spring planted new seedlings. This was the only way one could live and work productively. After all testers for days and sometimes for several days in a row were under the sun and the wind away from home – at the launch and technical positions, and just in the field for testing. And how nice it was to come after work in the yard, where the shadow, where peace and quiet where life moves in the other, a measured pace. It relieves stress, returns calm. At the initiative of Vasily Ivanovich schoolchildren planted park near the cinema "Youth". In the early 60s the town looked like an oasis in the desert, houses and cottages in the green framed by tall poplars and maples, paved sidewalks and streets under the trees, dense park with beds of flowers and even a fountain in front of the House Officers. 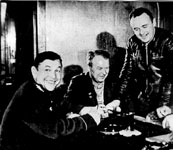 June 17, 1961 decree of the Presidium of the Supreme Soviet of the USSR marked "Not to be published" "for outstanding achievements and made a great contribution to the implementation of the Government to establish a special technique" Guard Colonel-General Vasily Voznyuk artillery was awarded the title of Hero of Socialist Labor and the Order Lenin and the gold medal "Hammer and Sickle." Among his awards - five Orders of Lenin, five Orders of the Red Banner, Order of generalship Kutuzov, Suvorov, Bogdan Khmelnitsky, the highest order of Yugoslavia "Merit of the people" and other medals. He first was awarded "Honorary Citizen of the Znamensk" - the city which he built.

After retirement Vasily lived only three years. September 12, 1976 this remarkable man was gone. According to the will he was buried in Komsomolsk city park, in a birch forest near the cinema "Youth". At the burial site now stands a bronze monument and are always fresh flowers from grateful city inhabitants.