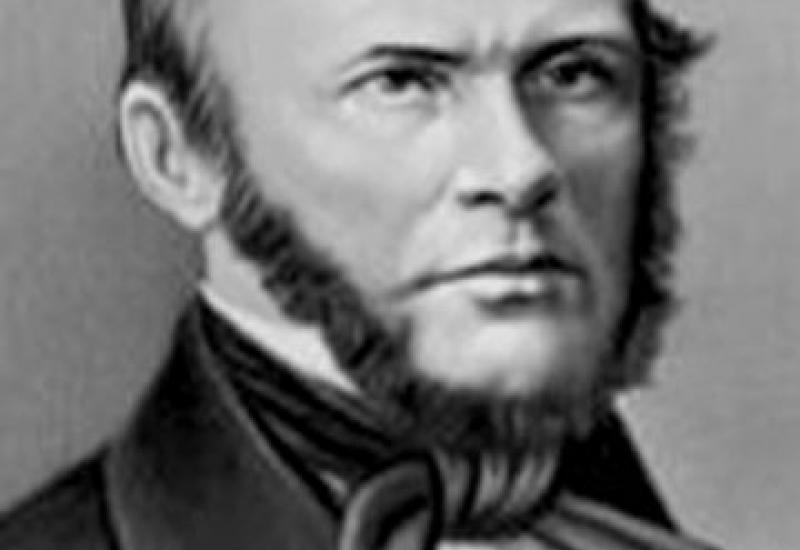 He was the son of a military officer Mykola Ivanovych Pyrohov, who served in the rank of major as a treasurer in Moscow provisions depot.

Mykola was educated first at home and then in a private boarding school. At the age of fourteen, he persuaded a priest to “enlarge” his age for two years for some fee and passed an entrance examination very well. Then Mykola became a medical student at Moscow University.

Pyrohov was a diligent student. He didn’t content himself with almost pure theory concerning some important issues, so he gained professional experience through his own original methods, which were unusual for students and teachers. So, he took bull bladder, stuffed it with chalk pieces, tied it up to his friend’s belly, and then he skilfully liberated the bladder from chalk pieces, observing all the necessary approaches and cuts carefully. Or he hid a wooden chip, which imitated a particular muscle, in the sleeve of the old frock coat, stuffed with rags, and carefully working with a scalpel, slowly ripped this cloth out, found the hidden chip and removed it.

Pyrohov unlike most strictly specialized counterparts combined his experience and knowledge as a surgeon and anatomist very well. Before doing any operation on a living man, he practiced in details on a dead body. Due to this methodology thousands and thousands of lives were saved.

In those years, any innovation in medicine made by venerable scientists was received with hostility. Very often Pyrohov suffered because of his admiration of something new and progressive. When Mykola Ivanovych invented some unusual surgical instrument, which had not been used abroad, an uproar about his philosophizing was made immediately But later an instrument, created by the scientist due to its convenience was practised on a large scale and replaced a traditional one. But the most dissatisfaction was caused by his extremely simple and reliable device for inhaling ether vapors for general anaesthetic during difficult operations. On February 14, 1847 Pyrohov performed his first operation using ether as an anaesthetic.

Next year Mykola Ivanovych worked with cholera epidemic. Preparing dead bodies, he observed cholera germ under the microscope, but he did not attach any importance to this. And only in 34 years Robert Koch recognized a cholera germ as a causative agent of this dreadful disease.

Once, when the epidemic began to diminish, Pyrohov was on the market. There he saw dissected frozen carcasses and stood as if spellbound. The scientist looked at frozen tissues, which preserved a natural structure with admiration. When Pyrohov bought various kinds of meat, including bones and tendons, to seller’s surprise, he returned home and began to split and saw frozen pieces up. With every moment in front of him appeared muscles, blood vessels, nerves and bones, mutual position of which showed a topographical relation of different tissues.

- If we frozen a dead body, - considered a scientist, - and then saw it up in layers, the organ displacement will not happen and they will remain in their places, which cannot be achieved during the traditional anatomical preparation, which is used all over the world. We will be able to see abnormalities of the anatomy of a particular organ during a pathological process clearly, and thus – we will be able to treat a similar pathology of a living person purposefully, but not to the touch. This method, invented by the scientist, was called as “ice anatomy”, and a four-volume atlas with a title “Topographical anatomy, illustrated with cuts through frozen human corpses” immortalized his name.

In the workshop of a sculptor, who lived near his house, scientist came up with the idea, which led to the creation of a plaster cast. By this time, a starch bandage, which did not dry up for a long time, and when it did, it was adjacent to the broken arm or leg incompactly, which could led to wrong knitting of bones, and also easily softened under the rain and moist air, was commonly used for the treatment of bone fractures A plaster cast did not have these defects, so soon all Europe used this invention to treat any fractures.

During the heroic defense of Sevastopol, where Pyrohov was as a volunteer in 1854 , he was impressed by the high mortality of wounded men. The scientist canceled the “common queue” of easily and severely wounded and also infected patients; so he offered to sort them and as a result he arranged a process of medical aid providing at all stages. Personally examining victims, Pyrohov gave instructions where and when a particular soldier or officer would be hospitalized, which significantly reduced mortality and postoperational difficulties.

During this period Pyrohov saved health or perhaps even life of 21-year-old Dmytro Ivanovych Mendeleev, who was appointed as a senior teacher of natural sciences in the gymnasium in Simferopol after graduation from Central pedagogical Institute. On the way to his future workplace, on the recommendation of a doctor, who at that time observed the health of seriously ill Mendeleev, the future scientist came to the famous surgeon. Pyrohov immediately disproved Mendeleev’s diagnose of “tuberculosis” and quickly returned him to normal life.

Dmytro Ivanovych for ever retained a sense of gratitude and admiration of Pyrohov. “He was a great doctor! – often he said. – He saw through a man and he immediately understood my nature”.

In 1862, Pyrohov saved a wounded leg for a national hero of Italy Giuseppe Garibaldi. All prominent surgeons of that period unanimously offered to amputate a leg, in the bone of which a bullet stuck in, and only Pirogov examined the wound carefully and rejected that proposal categorically. And then a miracle happened: on the twenty-fifth day of the patient’s lying the bullet approached the surface of the wound and was easily removed, and in a few days the wounded man could already walk.

Pyrohov generously shared his wide experience with students. For many years, while taking a position of trustee of Kiev and Odessa school districts, he struggled with main prejudices in education, spoke in support of the university autonomy and general elementary school. Thanks to Mykola Ivanovych Sunday schools were established in Kiev for the first time in Russia. It happened in 1859, when a medical clinic of St. Vladimir University was opened. The primary goal of education reform Pyrohov saw in education of an individual, which is affirmed by his word: “Everyone who are preparing to be a useful citizen must firstly learn to be a human”.

Ushynskyy K.D., who is a famous contemporary of Pyrohov N. I. and a founder of Russian science pedagogy wrote: “Finally among us we have a person, who we can proudly point out to our children and grandchildren and on whose flawless way we can lead our young generations. Let our youth look at this image – and the future of our country will be ensured”. “Pyrohov N. I. not only inspires us to work for the benefit of the community, but also creates strong confidence in the fact, that this activity will not be wasted. People, who have in their surroundings such individuals as Pyrohov N. I., can look into their future with confidence”.

…A great Russian writer Oleksandr Ivanovych Kuprin (1870-1938) has a story “A wonderful doctor”, which was firstly published in the newspaper “Kiev Word” in 1897 with the subtitle “The actual case”. Everything described in this story actually happened in Kiev. This is the contents of it.

In a poor family one of four infants fell ill. His father, named Mertsalov, without even a penny did not know what to do. Quite recently he had gone through typhus, so he spent all poor savings for medical treatment. After his recovering it turned out that he lost his job. Accidental earnings were not enough. Due to poor living conditions the whole family lived in a damp cave, where children began to ail. Three months ago one girl died, and now another one was moribund. The father went begging in despair, cursing his life. And suddenly in the park, where he was going to commit suicide, he met a stranger, who listened to Mertsalov with sympathy, introduced himself as a doctor and required to take him to the girl, who was dying, immediately. A strange doctor carefully examined the girl and, providing treatment, wrote a prescription. To thank the doctor, Mertsalov asked him to call his name. But for some reason he did not mention it. Mertsalov went with that doctor to the door, and when he returned, he found a prescription and a few big bank-notes under a tea-saucer. And when he got some drugs from a pharmacy, he immediately knew the name of his benefactor: the following words were written on the attached to the bottle label: “According to Professor Pyrohov’s prescription”.

Kuprin O. I. did not invented this story, he just described the incident that actually occurred in life of a man, who told him this touching story. “A wonderful doctor” was Mykola Ivanovych Pyrohov.

His life position, his world outlook Pyrohov expressed in words, which belong to him and which was included in the epigraph of the article “Questions of Life”: “ For what are you preparing your son? – someone asked me. To be a human, - I answered”. Mykola Ivanovych could say so because all his life he was a Human.