Ihor Leonidovych Oboznenko: the fate of the scientist in the context of history. In memory of the founders of domestic hydroacoustics 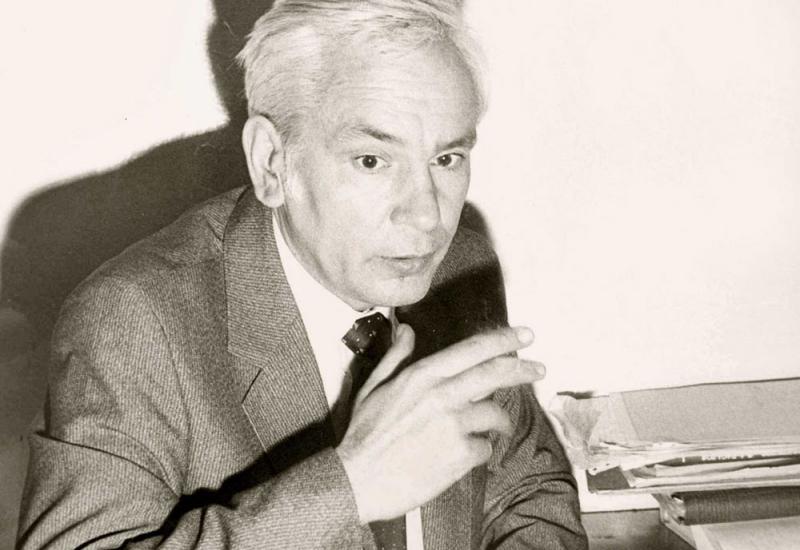 You usually remember youth time with love. Especially those people who met us, students of the 60s of the last century, when we first entered our alma mater - Igor Sikorsky Kyiv Polytechnic Institute and its Department of Acoustics. From there, our scientific and student life started…

We were greeted by a continuous constellation of outstanding teachers and scientists, among whom the brightest star was Ihor Leonidovych Oboznenko.

In the scientific world Ihor Oboznenko is a well-known person: The Member of the Acoustical Society of America, Associate Professor of the Department of Acoustic and Multimedia Electronic Systems at Igor Sikorsky Kyiv Polytechnic Institute, to which he dedicated more than 40 years of his creative life. The sea determined his fate, and the way to the sea came from his great-grandfather, the admiral A.Yelahin (Yelahin Island with its palace reminds of Yelahin in St. Petersburg). Ihor Leonidovych Oboznenko harmoniously inherited the talents of his ancestors - admiral A.Yelahin and his grandfather K.G. Smyryahin, outstanding teacher and director of Kyiv-Fundukleiv gymnasium. I mentioned ancestors not by chance, because family roots, according to a prominent historian and teacher, Professor of Kyiv University Volodymyr Antonovych, greatly (70%) influence the spiritual world of person and its talents. Upbringing, education and social environment are just an addition to the main thing.

The vagaries of bad luck

Ihor Leonidovych was born more than 80 years ago in Kyiv. At the very beginning of little Igor's life, severe trials awaited him. In less than a year and a half, the war came to Kyiv with the howling of sirens and the explosions of German air bombs.

But even before the war, waves of Stalinist repression swept the country. The Oboznenko family did not escape them either. In October 1937, his grandfather, artist Leonid Oleksiyovych Oboznenko, was shot dead in the Bykivnia Forest (his works were once exhibited in museums of fine arts in Ukraine). Documents testify to this crime (ref. “Bykivnia Pines testify: crime against humanity“. Book 1. page 20, Book 2. page 295) and the memorial stone "Artists-Victims of Repression" near the National Academy of Fine Arts and Architecture (Voznesensky Descent, 20), where his name is engraved among other victims of repression. After the war, grandmother Maria, Leonid's grandfather's wife, also died in exile. And his father, Leonid Leonidovych, repressed in the 1930s, fought in the penal battalion and died in 1944.

So, he shared the burdens of wartime and postwar with his mother and older brother Yurii. Starting living conditions were extremely unfavorable…

But he was not like that, this ambitious young man, so as not to overcome the vagaries of bad luck!

Even before the entrance exams to Igor Sikorsky Kyiv Polytechnic Institute, he solved more than 1000 mathematics problems in 10 days. And in later life he sought to make the most of the mathematical apparatus to solve his scientific problems, in particular the wave problems of hydroacoustics, which determined his scientific style, became his calling card.

He became a candidate of technical sciences at the age of 26, and three years later - an associate professor.

Three-quarters of the surface of our planet is occupied by the world's oceans, from where life came to earth. Hydroacoustics (or underwater acoustics) should help humanity regain the natural treasures that the ocean hide in its bowels.

But this was recalled by society only during the crash of the legendary ocean liner Titanic, which collided with an iceberg in the Atlantic Ocean and sank, and in the days of World War II, when German submarines terrorized the surface fleet of Europe and the United States in the struggle for hegemony in the seas.

Ihor Leonidovych's creative activity began in the severe days of the Cold War. He took an active part in the development of sonar systems, which were in service of the USSR Navy and were a worthy competitor to the United States.

Postgraduate student Igor Oboznenko was just preparing his Ph.D., when a purely American tragedy erupted on the waves of the Atlantic - the American supersubmarine "Thrasher" sank. The words of the radio operator during the last communication session - "Thrasher", answer!  haven't reached poor marines.

No reply - as the Anglo-Saxons say…

The American dream of the invincibility of her Navy also sank. The death of the underwater leviathan and the search for its remains sunk in the ocean depths (which even involved the famous bathyscaphe "Trieste" by Jacques Picard), prompted acoustic scientists around the world to intensify their research to develop sonar and methods for classifying underwater objects.

Ihor Leonidovych Oboznenko became one of the pioneers in this area.

Though as the legendary Dr. Faust he spent all his time in the pool of the Igor Sikorsky Kyiv Polytechnic Institute laboratory building, trying to find his El Dorado there - to solve the most difficult problem of hydroacoustics - the classification of underwater objects. On the shelves of the rack are large-scale models of the most famous submarines of the United States and NATO countries. There also was "Thrasher”.

The scientist studied the spectral characteristics of the scattering signals of these models, trying to identify the most characteristic properties of submarines in terms of their wave size and angle of rotation relative to the emitter. On the screen of the oscilloscope, in the patterns of echoes, this fan-scientist sought to find the main aspects in the behaviour of submarines that became objects of search.

Igor Oboznenko had only a trophy (during the Third Reich) arithmometer "Rheinmetall", thanks to which laboratory students calculated the spheroidal functions of Lame and Mathieu to simulate the acoustic field of a submarine. The only cathedral computer at that time, Mir-2, which was extremely busy, did not help either.

He rushed from the research laboratory to the institute audience to share with students, his future colleagues, his lectures, the accumulated experience and thoughts about hard and interesting scientific work, captivating them with his enthusiasm and creative inspiration.

The youth of the department somehow influenced all of us students. Ihor Leonidovych, until recently a student, understood us half-heartedly and shared with us the humour and joys of life. Only with time did we realize what happiness we were given - to communicate with an outstanding teacher and scientist!

However, for the sake of truth, he was willing to sacrifice his lecture time, friendship and even family ties. Because for a real scientist the truth is above all!

A student of Professor Mark Ilyich Karnovsky, he worthily supported the scientific traditions of the Soviet school of acoustics. And his research achievements included more than 300 works, which covered an extremely wide range of scientific problems - from the design of sonar antennas and the classification of underwater objects to medical and space exploration.

The 60's and 80's were the most productive period of the scientist's creative life.

That was his prime time: he was a truly coveted figure for the military-industrial complex of the USSR. He tested his ideas on the oceans - from the Black and Baltic to the Sea of Japan  and in the Far East.  His colleagues listened to Oboznenko with interest at international conferences, where he brilliantly presented the results of his research.

His works were published in the USSR and abroad, including in such elite publications as "Acoustic Journal" (Moscow), JASA (The Journal of the Acoustical Society of America), "Applied Mechanics" and others.

The works of the scientist took a worthy place in the Library of Congress.

But the autumn of life was approaching…

With the collapse of the USSR, the events of the 1990s brought much drama to the life of society and the scientist. Most of the seas and oceans remained outside Ukraine. And in Ukraine, the research of hydroacoustic scientists at that time was not very popular.

However, even under such difficult conditions, the scientist was able to implement his scientific ideas.  The problems of ultrasound diagnostics of objects of different shapes and wave sizes are in the field of his scientific interests of that time. He studied the resonant properties of human organs and blood vessels to diagnose various diseases.

And his gaze reached beyond the horizon, to other worlds: he intended to study the physical properties of UFO.

A courageous, emotionally stingy man with early gray hair, Ihor Leonidovych always felt an extraordinary creative uplift in the scientific laboratory, there he felt at home…

He was a happy man, probably because scientific activity became the content of his short (65 years) but beautiful life. This is exactly what his colleagues and students of previous grades said when took Ihor Leonidovych on his last journey.

… Time passes with amazing speed. Together with his relatives, the memory of the outstanding scientist and teacher is honoured by his colleagues from the Department of Acoustic and Multimedia Electronic Systems and numerous students who now work fruitfully in all corners of the globe.