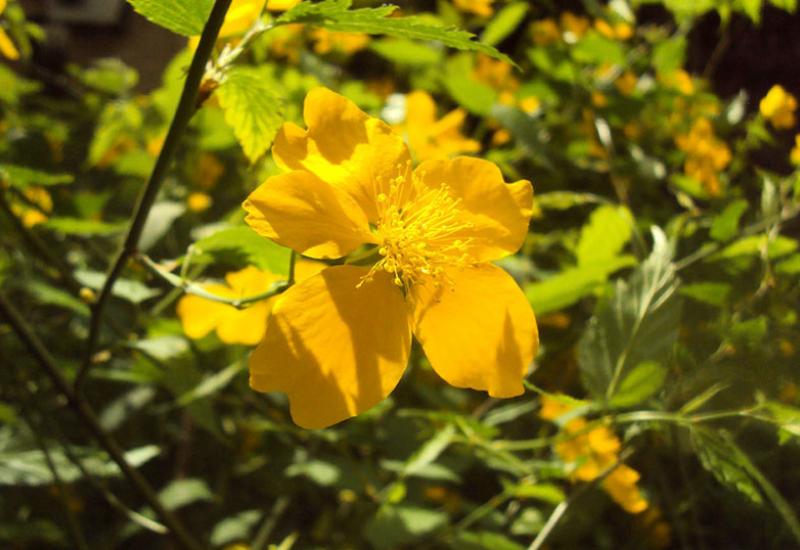 The landscape of Kyiv Polytechnic Institute becomes more beautiful and attractive: new elements, plantations and compositions appear. A spring blossom palette gladdens.  It would seem that all good corners were visited, explored and photographed. But it is not. Recently my colleague has puzzled me with a question: what sort of the sunshine bush blossoms beyond the first campus building on the right of the monument of E. Paton? If you don’t look out for it intentionally you could notice it only when you go on the fist floor to 6th exit. The ornamental bush with slender green shoots that form a weeping form of the crown, studded out simple bright yellow flowers with a light fragrance. The elegant elongated leaves with serrated edge were ornamented by distinct streaks.

The joint research made clear that it is Kerria (Kerria ja­ponica) - little known in our landscape design guest from Japan and south-western China. It gets its name from William Kerr – a gardener  and a collector of plants who worked in  London botanical Kew Gardens and was fascinated by flora of China, Jawa and the Philippines.

Kerria is a winter-hardy deciduous bush which belongs to the rose Rosaceae, has several species and sorts. All kinds are divided into simple and double-flowered. In early spring flowers which are similar to small roses appear on a double-flowered.  That is why it is often called Easter or Japanese rose. There are good reason why Kerria occupied a worthy place in the gardens of the Japanese emperors. In Europe Kerria appeared at the beginning of XIX century. it migrated fast enough from botanical nursery to the ornamental gardens of townspeople. During the time ornamental forms were separated, gardeners very like the sort with double-flowered flowers (pleniflora), it is like disheveled dandelions.

Karria is a drought-resistant plant, but prefers moist and rich organic soil. Bushes are not damaged by diseases and pests. And planting and transplanting, and all other instructions are the same as in the cultivation of roses. It is better to land in in protected from cold winds place. That is why A sunshiny bush of KPI hides in the most protected place from a bad weather. And we found it and we told you about it.  Admire and enjoy.