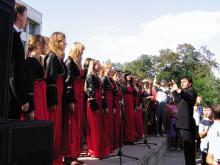 National academic choir of national technical University of Ukraine "KPI" was founded in 1947. The initiator of creation and first choir leader Lydia A. Padalko – at that time a student of the Kiev Conservatory. P. I. Tchaikovsky.

Already in 1948, the chapel of the CRPD took second place at the city competition of choirs of Kiev, in 1949 – the first city competition of higher education institutions and the second – national review of Amateur groups. In 1954, national review, dedicated to the 300th anniversary of the reunification of Ukraine with Russia, the choir occupies the first place, it is awarded with Honorary diploma of the Presidium of the Supreme Soviet of the USSR, and Lydia Padalko awarded the title of honored artist of the Ukrainian SSR.

In 1956 the chapel KPI invited at the student song festival Gaudeamus in Tartu (Estonia). Since that time she has participated in these feasts and choral competitions in Juventus, held in Kaunas (Lithuania). The staff of laureate of all – Union contest 1960, held in the framework of the Decade of Ukraine in Moscow. For his great contribution to the development of choral art choir received the title of National and its leader Lydia Padalko was awarded the order “Badge of Honor”.

In 1964 the choir was headed by the student of the 5th course of the Kiev Conservatory Maria Tiberia Palffy. She continued the tradition begun by Lydia Padalko, who at the time was the Director of the Kiev musical school. Glier. In concerts sounded youth works, arrangements of popular songs.

From 1966 to 1968 the chapel was led by the outstanding figure of choral art, Victor M. the Icon. During these years, the team significantly upgraded the repertoire, perfected his performance technique, has reached new heights in the sounding a capella.

In 1968-1970 the choir's artistic director was the scion of a prominent Ukrainian classic music Vitaly Romanovich Lysenko.

In 1970 the team returned Lydia Padalko, and later, in 1974, she, finally devoting himself to teaching activities, solemnly handed over the chapel to his assistant and chorus master Lucan Galina Gorbatenko.

Under the guidance of Galina Gorbatenko folk academic choir KPI has reached new peaks of performance, included in the choral elite in the USSR. During these years, she was awarded a gold medal and diploma of laureate of all-Union festival of folk art (1977), diploma of the Central Committee of the LKSMU of esthetic education of youth and promotion of folk arts and diploma of i degree for the victory in the Republican contest, dedicated to the 1500th anniversary of Kiev (1982), a number of awards for participation in art festivals. In particular, the diploma of the winner of II all-Union festival of Amateur art workers (1988), the title of best youth band at the festival of choral art in Saratov (1990). The choir became the winner of telecamera “Solar clarinets”, participated in the opening ceremony of the Kyiv national Philharmonic choir. Golden page in its history began in 1989. At the first national competition of choral arts. M. Leontovich, a gathering of the best Amateur choirs from all over Ukraine, she won the Grand Prix, and Galina Gorbatenko has received the Grand Prix best conductor.

Since 1989 chapel KPI was headed by Yuri Galatenko, Elena Gray and Tatyana Lutsenko. In the fall of 1992, the choir undertook a tour to Spain, where he demonstrated high mastery.

Difficult time in the history of the state was reflected in the fate of the team. The 50th anniversary since the founding of the choir celebrated only the veterans chapel at that time did not exist. The modern stage of its development began in 1999. Under the leadership of Victor Rudy, Ruslan Bondar, choirmasters Elena Ponomarenko and Julia Accent created virtually a new team. A new generation of choir was to revive the glorious traditions of their predecessors.

In September 2003 the choir KPI was awarded the second prize at the international competition “South Palmira” in Odessa, in December 2004 he received his honorary title of national choir, in 2005 he recorded his first CD, and in 2006 became the winner of IV all-Ukrainian competition of choral art named after. Lesia Ukrainka in Lutsk. Anniversary of 2007 the choir were winners at the city festival of choral art “Song over Dnipro”, XVI all-Ukrainian festival of Orthodox spiritual songs “From Christmas to Christmas” in Dnepropetrovsk, at the VI International competition-festival of chamber choirs “Yalta-Victoria-2007”, as well as laureates of the first prize at the XXVI International choral competition of sacred music “Hajnowka-2007” in Bialystok (Poland).

From the ranks of the chapel of the CRPD came many highly cultured professionals, many of them linked their lives with art. First of all, it is people's artists of Ukraine Anatoly Mokrenko and Vladimir Dubok. Past years the choir sing in the choir of veterans and the ensemble “Chumaky”, respectively managed by graduates of the KPI Capelli Alexander Zhigun and Wasil Trellis.

The current membership of the choir is the youth, engineering profession and whose future careers related to science and technology. They love music, talking in her language with the students, and their art leaves no one indifferent.