The Department of acoustics and acoustoelectronics – 80! 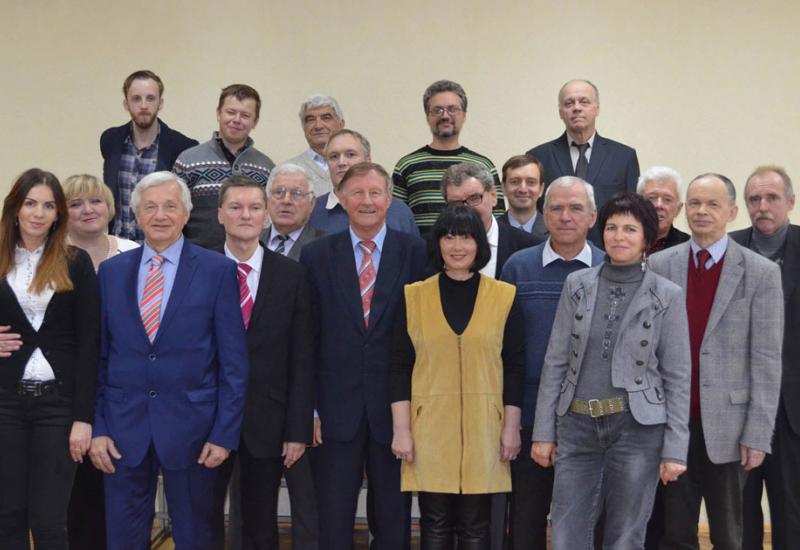 In the fall of 2016, the Department of acoustics and acoustoelectronics was 80 years old. This is a respectable age for humans and for the Department, and it is entirely understandable desire to look back and remember the right word for Department staff and their good deeds.

To begin with  a bit of history. In 1935 the Kiev Film Institute was renamed into the Kiev Institute of cinema engineers (KIKI), wherein 1936 established the Department of acoustics and radio engineering. The founder and first head of the Department from 1936 to 1938 was an outstanding scientist, Professor Lazar Davidovich Rosenberg, who went to work in KIKI with the Kiev Film Studio. He was succeeded by Professor Mark I. Karnowski, who led the Department for more than forty years, from 1939 to 1981. Then, from 1981 to 1987, the head was a doctor of physical and mathematical Sciences Ilya Mikhailovich Mikhailov, and since 1987 the Department was directed by Professor Vitaliy Didkovsky.

The creation of the Department began a systematic training of scientific and engineering personnel in the field of acoustics in Ukraine. The first scientific-technical developments of the Department were aimed at creating methods and tools for searching non-metallic min. For the solution of this task, it was necessary to combine the methods of acoustics and radio engineering because the metal mines were only electronic approaches and means. Key areas of training were even-traumatic, audio engineering, room acoustics, and individual rooms.

The first set of students was 2 academic groups, and subsequently the diplomas of engineers-acoustics, there were 43 graduates. At that time, the Department worked outstanding scientists of L. D. Rosenberg, A. A. Kharkevich. M. A. Korolev, N. And. Karnowski, S. I., Teitelbaum, V. I. Yakub. Developed new theories and instruments for applied acoustics and cinema technics: theory total reverb (L. D. Rosenberg, 1940); theory and calculation of tube-based frequency multipliers; measurement of speed fluctuations of sound boxes; the fundamental work of the guiding properties of complex radiators, acoustic lenses, resonators and sirens (G. I. Karnovsky, 1940-1948.); spectrum analyzers and non-linear distortions (W. M. wolf, 1953). The most significant scientific achievements of the Department staff were published in well-known monographs by L. D. Rozenberg, "Sound focusing system" (1949) and A. A. Kharkevich, "the Theory of converters" (1948), "non-stationary wave phenomena" (1950), "Spectra and analysis" (1952), "self-Oscillations" (1954).

Members of the Department have achieved significant results in the field of statistical hydroacoustics, space-time processing of the sonar signals the study of sonar methods and sampling in a wide frequency range, studies of hydroacoustic fields with mixed boundary conditions by you, investigate the methods of synthesis of antennas, the study of possibilities for active compensation of vibration and noise of moving objects, the study of classification in hydro-acoustics. At the Department, one of the first in the USSR, it established the input and processing of real sonar signals on a computer "Razdan-2" (1969).