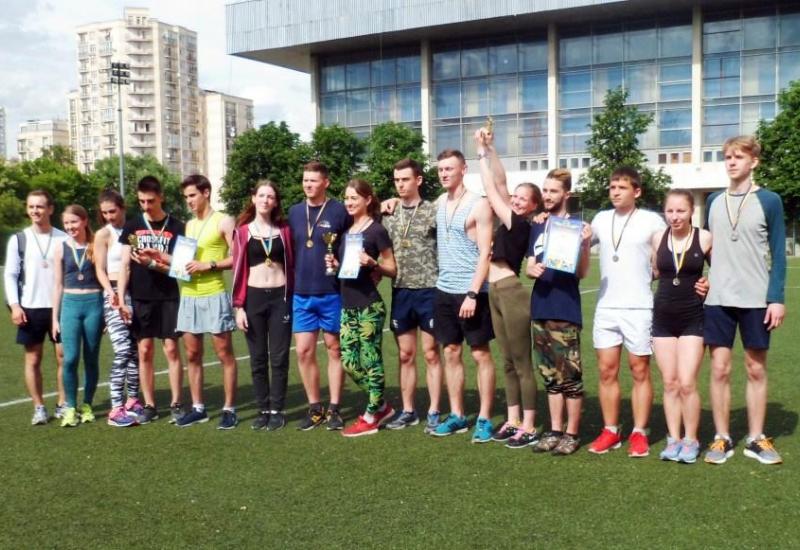 Sports occupies an important place among the hobbies of youth. It's a leisure and training, an interesting pastime, new friends, victories over oneself. We consider it necessary to preserve the physical education in the curriculum of the students of technical higher educationa establishment.

In the past school year, athletes and teams of Igor Sikorsky Kyiv Polytechnic Institute won 18 first placts, 23 second ones, 13 third ones, among them 5, first places and 2 second in international competitions. More detailed information can be found on our site http://sport.fbmi.kpi.ua/.

At the international competitions the best were: V.Ivakhnenko (FBMI, coach A.G.Krylov), who became the winner of the World Championship among men of weightlifting. Boxer A.Tymco (FICS) won the “gold” at the Open Euphorb Cup of elite battles under the guidance of the coach D.Z. Zapolskyi. The team on aerobics became the second in the program “Sport aerobics – trio” (teachers T.V.Pasichna and N.M.Lozenko).

Students and teams of the University won 22 prize places at Kyiv competitions.

Athletics: O. Belenyukin (FMM, coach N. M. Prus) became the second in the urban Student Race “Youth for Healthy Life”. Sport orientation: the team of the university (coach S.M. Uskova) took second place at the Open Championship of the Kyiv region, and in Chernigov, F.Karpovych (IASA) became the first, M.Zvyagin (FPM) – the second at the Ukrainian Championship among young men and juniors

Student teams from the University continue their winning titles. The futsalists (coaches S.O. Zhuravlyov and V.S. Kryvenda) took the first place in the Cup of Kyiv among higher education institutions and second places in the Kyiv City Championship among the higher educational institutions and the Kyiv Championship among the . The volleyball team (coach D.V.Tomashevskyi) became the winner in the Championship of Kyiv among student teams as well as last year. Triathlon team (coach L.V.Muravskyi) became the second in the championship of Kyiv among the higher educational establishments from the all-round “Defender of the Motherland”. Basketball players became the fourth ones at the Ukrainian Football Championship among the students, and were the first at the All-Ukrainian stage of the Ukrainian Basketball Championship. They also won the Cup of the trade union organization of Kyiv. The national football team (coach O.D.Mohunkko) has moved from the last place (last year) to the fifth stage of the tournament table.

The main competition of the University is the traditional annual Spartakiad. 154 teams from 11 sports from 21 faculties (institutes) took part in the competitions. The total number of participants was 1308 (1062 boys and 246 girls). Personal championship was held on the following sports: table tennis (40 participants), boxing (28), judo (21), weightlifting (31 students - on bench press and gymnastics). The most massive number of participants was the football competition – 392 students (19 teams). 208 volleyball fans were represented by 21 faculties, 148 students (19 teams) fought for the championship in basketball and 100 athletes (from 14 faculties) ran a lightweight belt race.