Strukturoscope EG is the winner of the startup competition 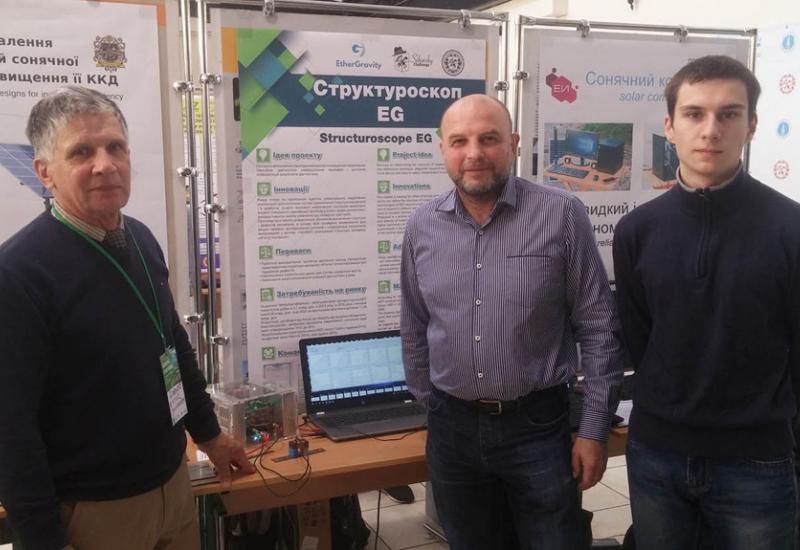 The project "Strukturoscope EG", presented by scientists of the Department of Non-Destructive Testing Instruments and Systems(PSNK), won the competition of start-up projects "Sikorsky Challenge - 2018". Fundamental knowledge of the members of the scientific team on physical and chemical processes in metal alloys, as well as the principles of electrical signal processing allowed to realize the idea in the form of a model.

The current model of the structuroscope allows the analysis of the diamond cell structure of various materials. The results of control can be presented in the form of the so-called "passport of the electronic structure of the material of the object of control". The proposed technology for determining the structure of the material and its implementation are protected by patents of Ukraine for inventions. The inventors have also applied for patents in EU countries.

The idea of the project belongs to the creative team of the department. For the time being, it was waiting for its performers, but in the spring of 2018, a team of scientists, teachers, graduate students and students gathered in the laboratories of the Department of PSNK to implement their plans. The development team, in particular, included: senior scientist O.G. Kalenychenko, senior teacher, candidate of technical sciences  Y.Y. Lysenko, graduate student Yu.O. Kalenichenko, master of science students O.E. Levchenko, S.S. Ratsebarsky, O.A. Povshenko and others. The team was led by one of the leading Igor Sikorsky Kyiv Polytechnic Institute scientists, Associate Professor of PSNK Victor Grygorovych Bazhenov.

V.G. Bazhenov has been conducting research and teaching activities at the Department of Non-Destructive Testing Instruments and Systems since 1982. He has more than a hundred publications, including a monograph and about 50 inventions and patents. In recent years innovative technologies of non-destructive control and technical diagnostics in the fields of geophysics, railway transport, etc. have been commissioned under the leadership of V.G. Bazhenov on command of leading domestic and Western European enterprises.

Student scientific works performed at the department during 2009–2013, the scientific supervisor of which was V.G. Bazhenov, were also successful.  The research results were regularly presented at the competitions of the International Salon of Inventions and New Technologies "New Time" (Sevastopol) and brought V.G.Bazhenov’s team  two gold, one silver and two bronze medals.

In 2012, the project, carried out by a team of scientists led by V.G. Bazhenov, became the winner of the Festival of Innovative Projects "Sikorsky Challenge". The following year, V.G. Bazhenov won the university competition "Teacher-researcher - 2013".

This autumn, the staff of the Department of PSNK achieved another success. According to the results of the competition "Sikorsky Challenge - 2018" the team of the start-up project "Strukturoscope EG" was awarded with a diploma by the International Expert Jury, and the project itself received support from the Foundation for Scientific and Technical Development of Ukraine named after Academician V.S. Mykhalevych. Negotiations are currently underway on the development and implementation of the project in production. Therefore, we wish the staff of the Department of PSNK further creative success, new ideas and their implementation.